Divided We Stand: Can We Survive Our Differences? 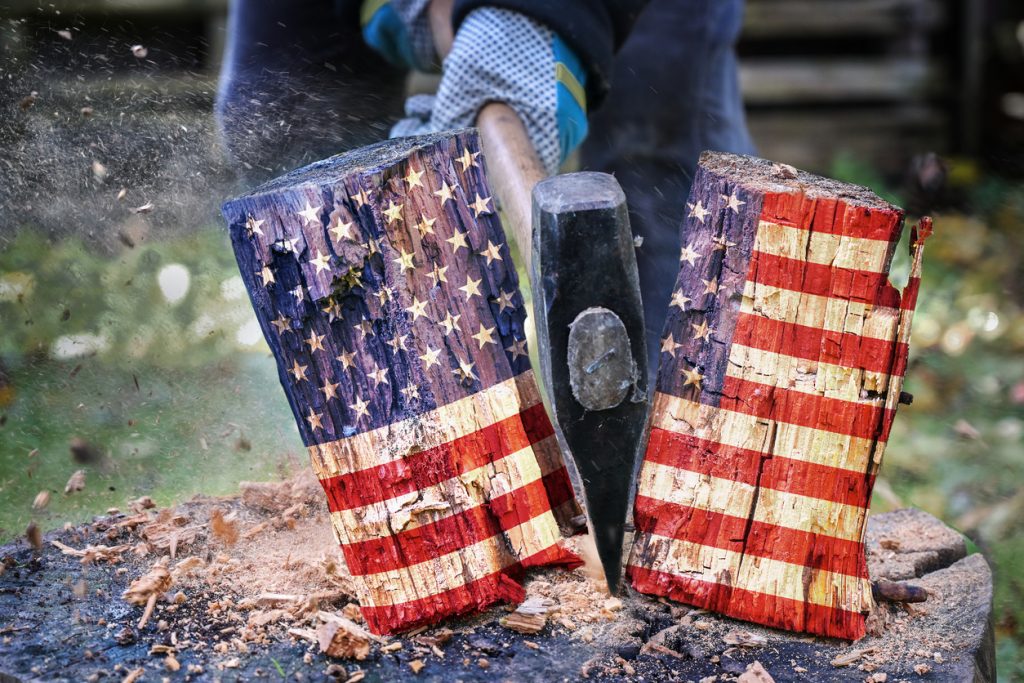 One of the most promising things I witnessed this past weekend was a conversation between two young women—one was attending a Trump protest about the vote counting and the other one was carrying a “Make America Gay Again” sign.  They told the reporter that they have been having a good time talking to one another and were better understanding their similarities and their differences. Unfortunately, I don’t see this happening between most people who are on both sides of our current divide.

A friend of mine, Sarah Cyr, recently posted on Facebook, “Understanding does not mean we agree, condone, or give in. It just means we see each other. What journey has this person lived that led them to think completely differently than me? What have I learned that makes me think differently than that? There is so much to learn and gain.”

Regardless of how you voted, most people seem to be expressing shock and disbelief that half of the country believes something diametrically opposed to what they do. Just this situation is enough to make people feel uncertain, afraid, and defensive. Most people can’t explain differing stances, much less do so with true understanding and an empathetic heart.

I can imagine what I would’ve felt like if Biden/Harris had not won, and I assume that the president’s supporters are feeling something similar – –a combination of fear, anger, frustration, disbelief, and sadness.  I can also imagine what I would have liked them to do if they had won and ask myself how I could respond in this way. Namely, I would hope for a combination of respect, curiosity, and interest.

While we will probably never agree on many substantive issues, we can try to understand why people feel the way they do. At the core of most of the differences there is probably a fear of loss and safety. To borrow from my yoga philosophy–these are root chakra types of concerns.  The root chakra, or mūlādhāra chakra in Sanskrit, is known as “the root of all things.” It governs one’s senses of stability, safety, strength, and commitment and is responsible for self-preservation and feeling grounded.

I also need to add a disclaimer that I do not give credence to conspiracy theories, racism, unfounded claims of election fraud, corrupt politicians, and the like. But, it will be useful to understand how these became so deeply rooted in our country.

In order to move ourselves in the direction of mutual understanding and respect, I do think it is useful to engage in activities that bring our root chakras back into alignment. When you feel safe and grounded, you will be more likely to be curious about the viewpoints and beliefs of others. Again, this does not mean that you have to agree with them, but be willing to see others as valued human beings.

1.  Lovingkindness practice. For one thing, it is helpful for me to remember that all human beings have the same desires to be happy, healthy, safe, content, and free from suffering. The lovingkindness practices are wonderful for working with our hearts so they might open to people that are difficult for us to love.  Sending simple phrases to others, known and unknown, like “may you be safe, may you be happy, may you be healthy, may you live with joy and ease” can be a balm for your heart and ground you in a sense of security and safety.

2. Physical activity.  Physical exercise or simply moving the body in ways that feel delicious can have a powerful effect on how grounded you feel. Certain yoga poses can be very grounding (e.g., child’s pose, bridge pose, squat, mountain, goddess warrior). Or, if you prefer, just turn on some music and dance!

4.  Visualizations. You can even introduce grounding exercises like visualization while you’re breathing deeply.  One particularly powerful visualization that I have practiced in the past is to imagine a golden ball of light shining from my heart into the heart of someone I am having difficulty with. See the other person in front of you, gazing into their eyes, while allowing this golden light to connect you at the heart level. It is only at the heart level that we can begin to open ourselves to other beings, particularly those with whom we disagree.

5. Affirmations.  Some helpful affirmations for the root chakra that I found from a yoga website called Be My Travel Muse are:

I am centered and grounded.

I am here and I am safe.

With every breath, I release all anxiety and fear.

I am at home in my body.

I have everything I need to create the life I desire.

For our nation to truly become one where everyone can live without fear, the great divide that we now face will need to narrow. Once you feel grounded, you’re in a better position to step into the unknown and find out what you can learn. Seek out opportunities to understand people different than yourself. Turn on a different radio station, a different TV station, read a different newspaper, and read books that help you gain more perspective. Listen with curiosity and the desire to learn as your only agenda.

Sarah Cyr, my friend I mentioned earlier, suggested we can close the divide “with small steps of familiarity” and posed these questions: How familiar are we with those we disagree with? Could we have dinner with them, be on a team with them, have civil discussions about rights and freedoms? Or are some topics off limits and why? Can we hold space for each other’s viewpoints, religious beliefs, heritage, political stance and beyond? Why do we delete them from our lives instead of increasing our curiosity for theirs? It’s just easier?

Kamala Harris, the first Black woman and first South Asian American woman to become vice-president-elect, began her victory speech by quoting the late congressman and civil rights leader John Lewis, who said, “Democracy is not a state, it is an act.” She also stated that “We the people have the power to build a better future.” Both of these statements ask us to take action in working for the values we believe in. For me, these would include working against systemic racism, healthcare for all, action on climate change, and LGBTQ rights. I will look for ways to respect and care for all beings so that our country has the opportunity to be truly great and gay again.

Lastly, Desmond Tutu said “When we see each other as the enemy, we risk becoming what we hate. When we oppress others, we end up oppressing ourselves. All of our humanity is dependent upon recognizing the humanity in others.”

So, I will be seeking understanding, working for the rights of all people, and working to save our environment so we have a world left to live in. Whenever I can, I’ll meet you in the middle of the great divide. And, when I do, I come in peace.