Mindful Yoga Makes You Smile – Join Me On the Mat! 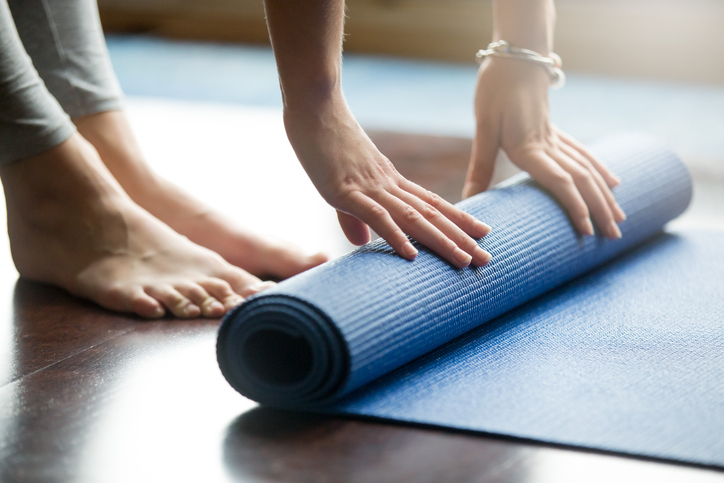 This February after I completed a week-long Kripalu yoga retreat in Costa Rica, I was on cloud nine. This was my fourth time attending and co-teaching this retreat and the combination of yoga, companionship, sunshine, and beautiful flora were a cocktail of endorphins, dopamine, and serotonin—all hormones that lead to greater happiness.  Back home, I notice that even experiencing an hour of mindful yoga can bring back those lovin’ feelings.

Three decades of research has demonstrated that practicing many types of mindfulness exercises will lead to positive changes in your physical and mental health. However, I recently ran across a study** that was conducted to look at possible differences in the impact of commonly used mindfulness-based interventions—sitting meditation, mindful yoga, and body scan. All participants were assigned to one practice and were trained over three sessions for an hour each. Each participant reported significant improvements in rumination, self-compassion, and psychological well-being regardless of condition.

If you’d like to increase your lovin’ feelings more often, find a good mindful yoga or Kripalu yoga class in your area. I use the words “mindful yoga” and “Kripalu yoga” interchangeably because they both emphasize paying attention to your internal experience to guide you.

In Columbia, MO, where I live, I’m happy to announce three upcoming opportunities to practice Kripalu yoga with me. I will start teaching yoga weekly at alleyCat Yoga on Fridays from 4:30 – 5:45 p.m. starting April 6 and Wednesdays from 5:30 – 6:45 p.m. starting May 9. Last, but something I am extra excited about, I will be leading a Kripalu Yoga and Mindfulness Retreat called Celebrating Life! February 2 – 9, 2019, at the beautiful Pura Vida Spa in Costa Rica. Register early to reserve your spot.

Now that I work for myself, I have been able to dedicate more time to the yoga practice that gives me great joy. I hope to see you on the mat in the near future.