TV can ruin your health 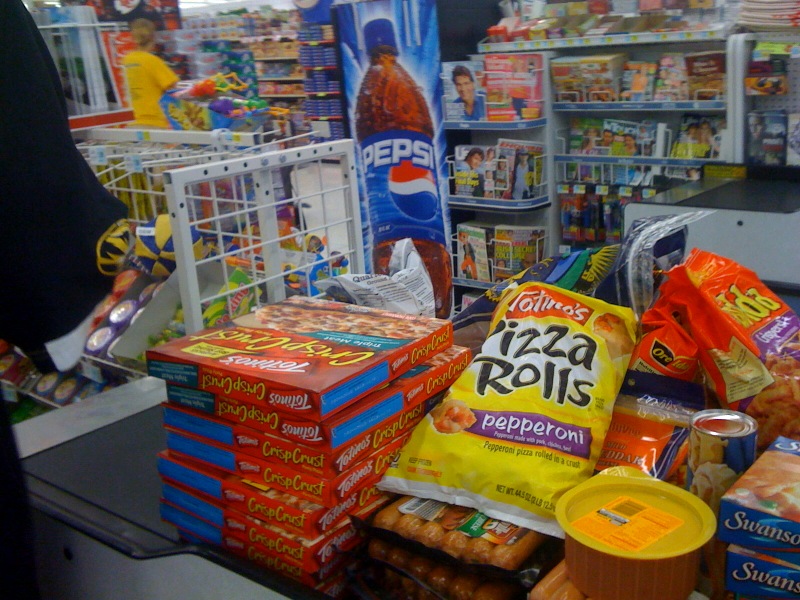 I don’t watch that much TV, but it was pointed out to me how awful the food ads are, particularly from 7:00 – 9:00 p.m. (exactly when people tend to sit in front of the TV and eat).  The food that’s advertised tends to be similar to the food that you see in the picture associated with this blog.  This was an actual picture taken by a friend of mine of the food being purchased at a local grocery story by a couple in front of her in the checkout. I see nothing that could be called “real food.”  My friend (who is a fabulous cook) was so appalled at the sight of it that she had to take a picture on her I Phone.  She knew I’d be horrified as well.

We are psychologically influenced/manipulated by ads on TV and the pictures and messages on the packaging.  To prove my point, there is data from a national nutrition survey of over 9,000 people which showed as TV viewing went up, so did the amounts of higher-calorie snack-type foods, pizza, and sugary soft drinks. And those adults who watched more than 2 hours of television consumed more calories at supper and snacks.  It is not surprising then that people who viewed more than 2 hours of TV a day had a higher incidence of chronic health conditions such as diabetes, hypertension, heart disease, or high blood cholesterol. One could blame less physical activity during TV viewing as the reason for increased weight, but people also eat more when watching TV. This study indicated that calorie intake goes up as TV time goes up.

So, the tip of the day is “pick your favorite TV shows and leave the rest.”  Turn off the TV and get to know your family and friends and pets better.  Eat your meals at the table.  Go for a walk, run, bike ride, or some other kind of physical activity.  There are so many better things to do instead of “veg out” in front of the TV.